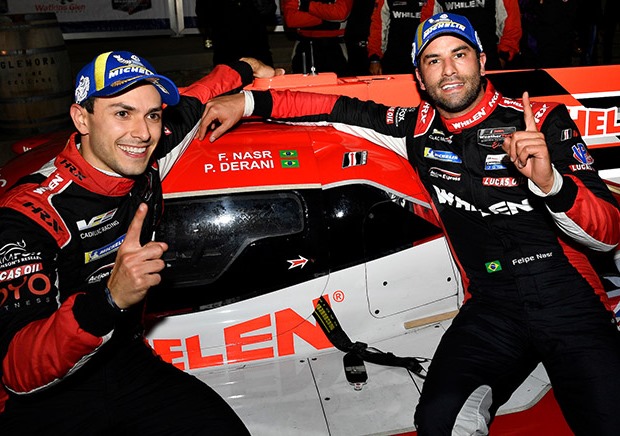 By Jeff Olson and Mark Robinson

ELKHART LAKE, Wis. – They’re getting closer, but time is running out. Pipo Derani and Felipe Nasr see that dynamic as an opportunity to be aggressive.

Just four races remain in the 2021 IMSA WeatherTech SportsCar Championship season for the DPi class, and the teammates share third place in the driver standings. But they’re closing quickly.

“Because we’re not leading and we’re catching up, we can allow ourselves to be aggressive and just go for the race win,” Derani said.

That’s the plan for the IMSA SportsCar Weekend at Road America this weekend, both in Saturday’s qualifying session and Sunday’s race. But caution was the approach Friday as the team skipped a wet opening practice session shortened to 30 minutes after a thunderstorm interrupted track time earlier in the day.

Consistency usually wins championships. After a disappointing start to the season at the Daytona and Sebring endurance races, though, the No. 31 Whelen Engineering Racing Cadillac DPi-V.R drivers decided to chase points in a different way. Instead of defending a lead, they’re attacking a deficit. Winning the IMSA WeatherTech 240 at Watkins Glen on July 2 helped them close within 114 points of first place.

“Coming from the back, we’re able to push those guys and go for the wins,” Nasr said. “That’s exactly what I want to do. I feel like the team has put together a good plan. The last race gave everybody a boost. I’m excited about what’s ahead.”

The teams they’re chasing aren’t slowing down. The No. 10 Konica Minolta Acura ARX-05 shared by Filipe Albuquerque and Ricky Taylor leads the standings; Albuquerque’s best lap Friday was second fastest in the DPi field. Second in the DPi standings are Harry Tincknell and Oliver Jarvis in the No. 55 Mazda Motorsports Mazda; Tincknell topped the chart Friday with a lap of 2 minutes, 9.769 seconds (112.297 mph).

Derani knows he and Nasr can’t let up now.

“We can’t give ourselves the luxury of thinking about the championship,” Derani said. “We just have to keep doing what we’re doing, which is focusing on winning races. With one or two races to go, we’ll see where we are. That’s a different mentality from leading the championship from the very beginning.”

WeatherTech Championship action at Road America continues with practice at 9:55 a.m. ET Saturday, ahead of qualifying at 2:50 p.m. (livestream on IMSA.com/TVLive). The two-hour, 40-minute race begins at 2:40 p.m. Sunday and airs live on TrackPass on NBC Sports Gold, with the NBCSN race telecast at 8 p.m.

Selin Rollan pulled away from the pack late to win Friday’s Idemitsu Mazda MX-5 Cup Presented by BFGoodrich race at Road America. Driving the No. 87 Hixon Motor Sports Mazda, Rollan won by 0.575 seconds over Gresham Wagner in the No. 5 Spark Performance Mazda to collect his fourth victory of the season.

By finishing second, Wagner unofficially took the season points lead by 10 over Michael Carter, who finished fourth on Friday. Race 2 of the MX-5 Cup weekend starts at 11:30 a.m. ET Saturday and streams live on IMSA.com/TVLive and TrackPass on NBC Sports Gold.

Jan Heylen, tied for the IMSA Michelin Pilot Challenge championship lead, was quickest through two practices Friday at Road America. Driving the No. 16 Wright Motorsports Porsche 718 Cayman GT4 Clubsport he shares with Ryan Hardwick, Heylen turned the best lap of the day, 2:16.872 (106.470 mph), in the opening session. It was 0.171 seconds better than Robby Foley in the No. 96 Turner Motorsport BMW M4 GT4.

Heylen is tied with No. 95 Turner BMW drivers Bill Auberlen and Dillon Machavern atop the Grand Sport (GS) standings.

Ryan Norman was fastest in the Touring Car (TCR) class with a lap of 2:20.587 (103.656 mph) in the No. 98 Bryan Herta Autosport with Curb-Agajanian Hyundai Elantra N TCR he co-drives with Parker Chase. Michelin Pilot Challenge qualifying begins at 9 a.m. Saturday. The two-hour race starts at 5:35 p.m. Saturday and streams live on TrackPass on NBC Sports Gold.

The starting grid for Race 1 in Porsche Carrera Cup on Saturday was set by entrant points, meaning championship leader Kay van Berlo (No. 3 Kelly-Moss Road and Race Porsche 911 GT3 Cup car) will start from the pole position. Teammate Seb Priaulx (No. 15 Porsche) will start alongside on the front row. The race starts at 12:35 p.m. Saturday and streams live on IMSA.com/TVLive and TrackPass on NBC Sports Gold.

The starting grid for the first Lamborghini Super Trofeo race of the weekend was determined by top speeds in the opening practice on Thursday. It puts Kyle Marcelli and Danny Formal, co-drivers of the No. 1 Prestige Performance with Wayne Taylor Racing, Lamborghini Paramus Lamborghini Huracán Super Trofeo EVO on the pole. The 50-minute race begins at 1:40 p.m. Saturday and streams live on IMSA.com/TVLive and TrackPass on NBC Sports Gold.

Richard Antinucci, the Lamborghini Super Trofeo Pro class points leader, was involved in a three-car incident during the Friday practice. His No. 27 Dream Racing Motorsports, Lamborghini Las Vegas Huracán was damaged and will be unable to continue this weekend. Antinucci will join teammate Dario Capitanio in the No. 22 Dream Racing Huracán for the races on Saturday and Sunday. 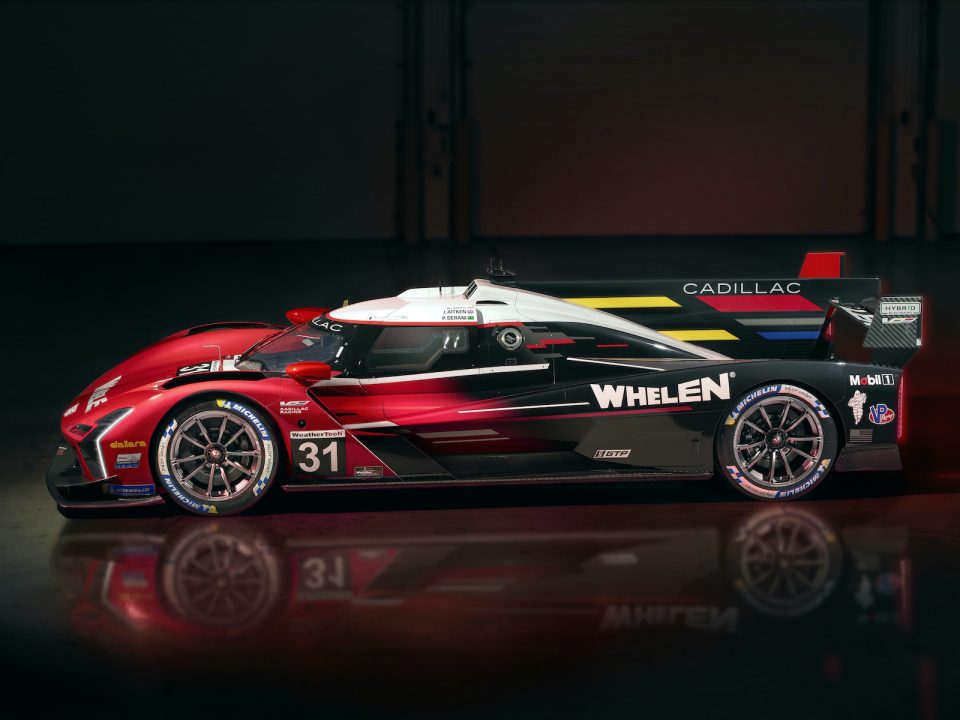 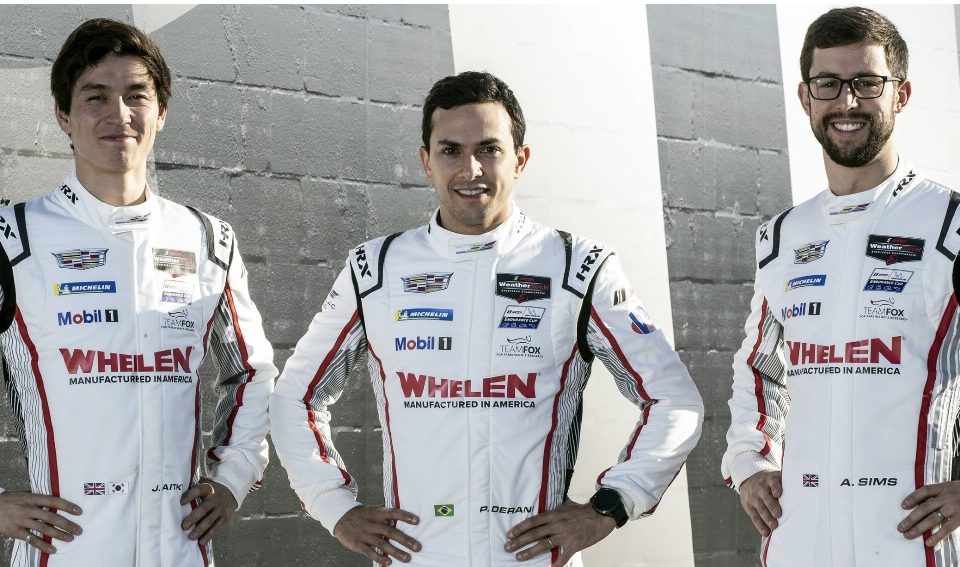