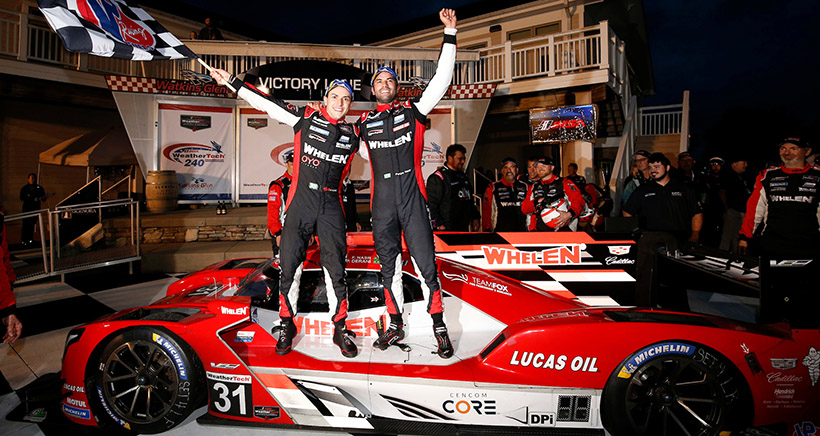 WATKINS GLEN, N.Y. – Smart strategy and deft fuel saving on a wet track led to the first victory of the season for Felipe Nasr and Pipo Derani.

Their No. 31 Whelen Engineering Racing Cadillac DPi V.R took the lead Friday during pit stops shortly after the end of a 46-minute red flag for weather late in the IMSA WeatherTech 240 at The Glen. Nasr then stayed ahead of the field after a late restart to conclude an emotional victory.

“It was just awesome,” Nasr said. “That’s what racing is about. It’s hard. When you pull it out, it really amazes you.”

The strategy, to which Action Express Racing committed before the race, allowed the team to take fuel only during the final pit stop while others were receiving full service. That let Nasr leap the field and take the lead.

One problem. Nasr wasn’t sure if he had enough fuel to reach the end of the race.

Nasr crossed the line 1.473 seconds ahead of Renger van der Zande in the No. 01 Chip Ganassi Racing Cadillac DPi V.R he co-drove with Kevin Magnussen. The No. 10 Konica Minolta Acura DPi ARX-05 driven by Filipe Albuquerque and Ricky Taylor finished third, increasing its lead in the Daytona Prototype International (DPi) class to 81 points over the No. 55 Mazda Motorsports Mazda DPi and drivers Harry Tincknell and Oliver Jarvis. 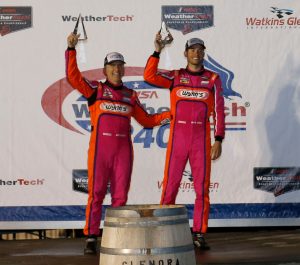 The No. 52 PR1 Mathiasen Motorsports ORECA LMP2 07 shared by Ben Keating and Mikkel Jensen also maintained its points lead in the Le Mans Prototype 2 (LMP2) class with a 21.839-second victory over the No. 11 WIN Autosport ORECA co-driven by Tristan Nunez and Steven Thomas.

Knowing it was fastest in class, the PR1 Mathiasen team decided to use the pace to their advantage. Instead of saving fuel, Keating and Jensen went as fast as possible.

“We decided to go hard from the beginning and try to build enough of a gap that we could afford to do a stop and keep the lead.” Keating said. “That’s exactly what we did. It worked out really well.”

Gabriel Aubry and John Farano were third in LMP2 in the No. 8 Tower Motorsport ORECA. 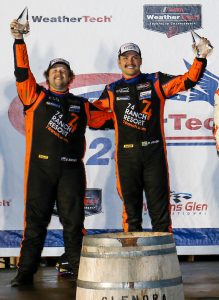 In Le Mans Prototype 3 (LMP3), Felipe Fraga completed a sweep of Watkins Glen’s 11-turn, 3.4-mile circuit, adding the WeatherTech 240 to Sunday’s victory in the Sahlen’s Six Hour of The Glen. The win, the fourth for the No. 74 in five LMP3 races this season, extended co-driver Gar Robinson’s lead in the class driver standings.

The call by Riley Motorsports to keep the No. 74 Ligier JS P320 on track after the red flag – despite worn tires – was crucial, Fraga said.

“We only did one pit stop,” Fraga said. “That put us in front of them because we didn’t stop for fuel and tires, of course. But that was a little bad for the tires because they already had one cycle of temperature before the red flag. It’s not so good when you go hot, cold and then hot again. At the end of my stint, I was suffering a little bit.”

Fraga won by just 0.276 seconds over Dylan Murry in the No. 91 Riley Motorsports Ligier he shared with Jim Cox. Colin Braun and Jon Bennett were third in the No. 54 CORE autosport Ligier.

In the end, Nasr and Derani were confident in their chances. But, as always is the case in racing, uncertainty reigns.

“In those situations, you never really know if it’s going to play out your way,” Derani said. “You’re gambling and possibly adding an extra stop, but it’s better to try to gamble and go for a win than finishing in third or fourth. They did that with a tremendous amount of confidence in the team and the strategy and the drivers.”