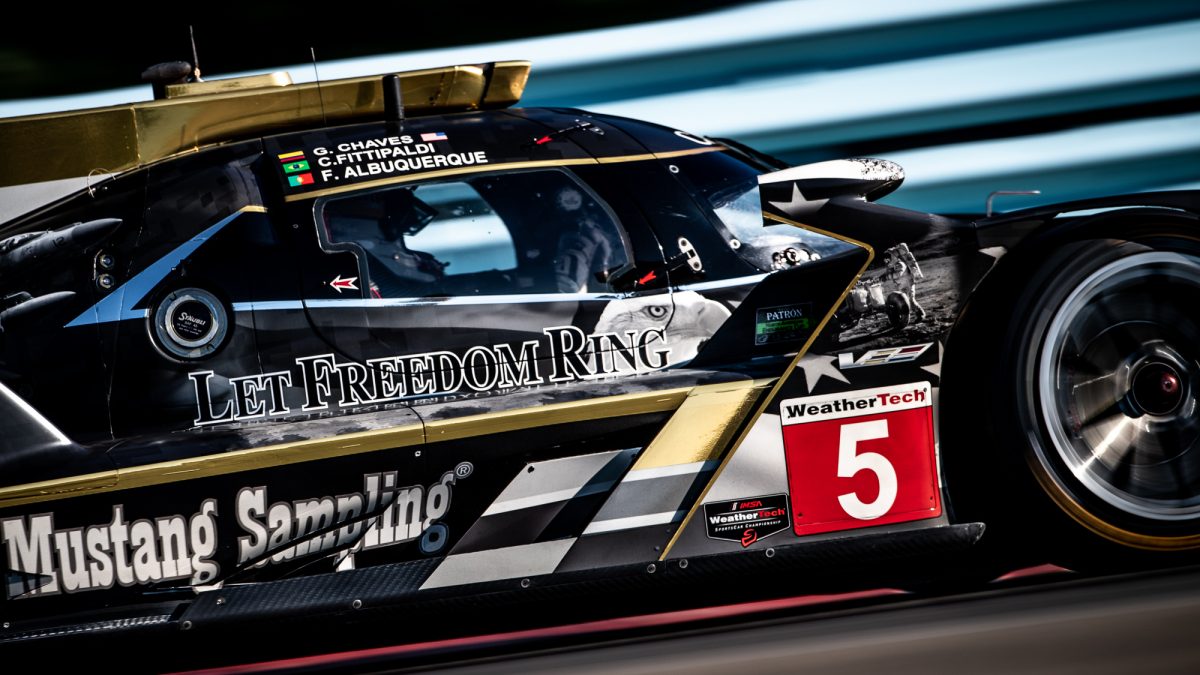 Watkins Glen, N.Y. (1 July 2018)  Carrying the icons of American history and honoring the branches of the Armed Forces, the No. 5 Mustang Sampling Racing Cadillac DPi-V.R raced hard to take a sixth place finish in the Sahlen’s Six Hours of the Glen on Sunday with drivers Gabby Chaves,  Christian Fittipaldi and Filipe Albuquerque. The team had been targeting a third consecutive victory at Watkins Glen in the prestigious six hour race, but were unable to match that result despite a well-executed effort on both sides of the pit wall.

Albuquerque moved up at the start to run tenth in the opening segments of the race before turning the controls over to Fittipaldi. Clicking off the laps through a long green flag stint as the race developed a fast rhythm, Fittipaldi passed the driving duties over to Chaves, who was making his first IMSA start since 2016. The custom patriotic-liveried Mustang Sampling Racing machine moved up to run as high as second just past the 50 lap mark.

Working to find areas for performance to compensate for the top speed differential between the DPi machines and the LMP2 entries, the drivers had to push at every corner to keep the pace as the Cadillac Prototype raced through the warm afternoon temperatures in the top ten. Just four full course cautions slowed the field, including a final one on lap 176. Having continued to adjust strategy and fight for track position, the Mustang Sampling entry restarted in fourth position.

A frantic restart saw a big fight up front, with a pair of LMP2 entries slipping by Albuquerque on the straights but the Portuguese pilot held strong to come home in sixth at the checkered flag.

“We were looking for more,” said Albuquerque. “In the end, I think the team did a hell of a job. Everyone saw how slow we were on the straights and even if we had a comeback they would all just pass us like nothing. It felt like we were in a different category than everyone else. We do the best with what we had and today I didn’t have a single tenth left in the car to finish quicker. On to Mosport!”

“We came home with solid points,” said Fittipaldi. “It was a tough day for all the Cadillacs out there. I don’t know what we could have done better since we were on our absolute limits and tried whatever we could and it didn’t work out this time. We will turn the page and move onto next week.”

The race was the first start with the team for Chaves, who relished his first run in the Cadillac Prototype.

“It was a lot of fun!” said Chaves “Being able to work in a different environment, with teammates driving the same car, that in of itself is a change for me. It was a good day. We managed to maximize everything on track, it’s hard to see how we could have done anything better.  The team had a perfect strategy and did a fantastic job. Everyone drove as hard as they could and you come out with what you come out with and I am happy with that. The car is fantastic and it drives really well.  It’s an all around great car to drive.  It’s more experience and I am happy to help the team get more points, obviously not where we want to be but out of our control this weekend.”

The Glen endurance event will be followed closely with a sprint race next Sunday as the IMSA WeatherTech SportsCar Championship heads North to Canadian Tire Motorsports Park.