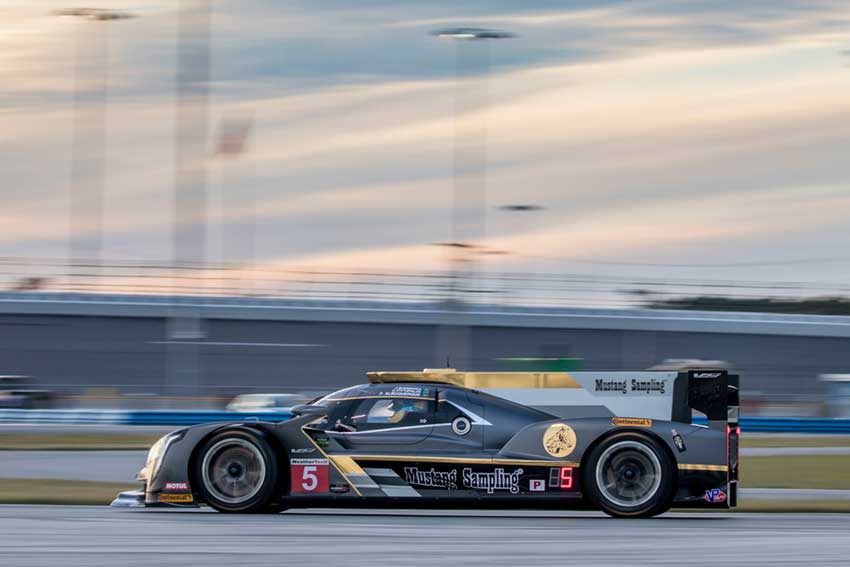 Daytona Beach, Fla. (22 January 2018)  The 2018 WeatherTech SportsCar Championship season will open next weekend at Daytona International Speedway with the 56th running of the Rolex 24 At Daytona, and Mustang Sampling Racing will look to start the year with a big result in the twice around the clock classic event.

Mustang Sampling Racing won the 2014, 2015,  2016, and 2017 Tequila Patrón North American Endurance Cup titles and has spent months preparing to add to that record of success in the most challenging events on the IMSA schedule.

2010 and 2014 Rolex 24 At Daytona winner Joao Barbosa (PRT) will team with his full-season co-pilot Filipe Albuquerque (PRT) in the No. 5 Mustang Sampling Cadillac DPi-V.R, with 2004 and 2014 Rolex 24 At Daytona winner Christian Fittipaldi (BRA) returning with a third victory in his sights. The driver line up marks the third consecutive season that the trio have combined for Mustang Sampling.

Last year, the team took the Rolex 24 pole on debut with the No. 5 Mustang Sampling Cadillac DPi-V.R on the way to finishing second in the race. The 2018 season will see the effort look to benefit from the continuity that comes with having the same driver line up combined with the benefits of utilizing the capable Cadillac DPi-V.R package for a second season.

The event will open with practice and qualifying on Thursday, with final practice on Friday ahead of Saturday’s 12:00 PM autograph session and race start (LIVE on FOX at  2:00 PM ET).

Joao Barbosa has been a key part of the Action Express Racing driving lineup since the team took its first-ever winning laps in 2010. The affable Portuguese racer has two Rolex 24 At Daytona victories, two IMSA WeatherTech SportsCar Championships, and an amazing four consecutive Tequila Patron North American Endurance Cup titles to his credit, all earned with Action Express Racing. Victories at Sebring, Watkins Glen, and Petit Le Mans, not to mention millions of hits on Youtube from the video of him driving his wife around Daytona International Speedway are just part of Barbosa’s incredible racing record.

“I am really looking forward to the start of the season and to make-up what we lost at the end of the race last year,” Barbosa said. “We have a full year of experience in the Cadillac. The team knows exactly what to expect from the car. The competition is very good, and the Cadillac ran very strong at the test. It is going to be very competitive. There are a lot of good cars and teams that can win the race. The Mustang Sampling team prepares a good car and they know what to do in these long races with pit stops and strategy. It is a lot easier when you have good drivers, who are fast and everyone is comfortable together. We have a year together so we are a known quantity.”

Filipe Albuquerque first joined Action Express Racing in 2016, and had an immediate impact, taking a podium in his second start with the team and then winning in his third. Following a traditional European path in the sport that started with standout drives in karts, victories in formula car racing, and even a Formula 1 test at just 22 years old, Albuquerque scored a championship in his very first year of GT3 competition. Soon, Audi came calling as he joined their DTM and Le Mans competition efforts. Still active in European Le Mans competition, Albuquerque will be a full-time force for Action Express Racing in 2018 as co-driver with Joao Barbosa in the No. 5 Mustang Sampling Racing Cadillac DPi-V.R.

“The Mustang Sampling team is a great group,” Albuquerque said. “We almost won the race last year. This year it seems very promising again. Cadillac and the team are doing a great job with the car. The competition is very tough this year. We have to respect them and keep working. We have to assume that we are one of the favorites. We have been together for a year, everyone knows what to do. We have a lot of laps in this car and we won the endurance championship last year. For example, the first laps of the Roar test, we just went out and were ready. While the others were trying to figure out their drivers and things, we were just ready.”

From Formula 1 to the Rolex 24 At Daytona to NASCAR to Le Mans to the Indianapolis 500, Christian Fittipaldi has done it all. The Brazilian racer, born to racing royalty, was a standout in IndyCar competition after having made his F1 debut at a very young age. Fittipaldi picked up one Rolex 24 victory in 2004, and came back to repeat the feat with Action Express Racing in 2014 on his way to scoring the 2014 and 2015  IMSA WeatherTech SportsCar Championship titles. A four-time winner of the Tequila Patron North American Endurance Championship, Fittipaldi will contribute to the team effort in 2018 both outside and inside the cockpit of the No. 5 Mustang Sampling Cadillac DPi-V.R as the team’s Sporting Director.

“I am in the countdown of these races in my career not the count up like some of these drivers who are in their 20s,” Fittipaldi said. “I want to take every opportunity I can to win, because you don’t when it will come back. We came so close last year, but it didn’t go our way. It really comes down to preparation. The Mustang Sampling guys do a great job with the car. Joao (Barbosa), Filipe (Albuquerque)  and I will take advantage of the team’s preparation. The Cadillac pretty much dominated the championship last season so we have a very reliable and fast car. The Cadillac is very strong. We are looking to capitalize on that for the season and of course the 24.”