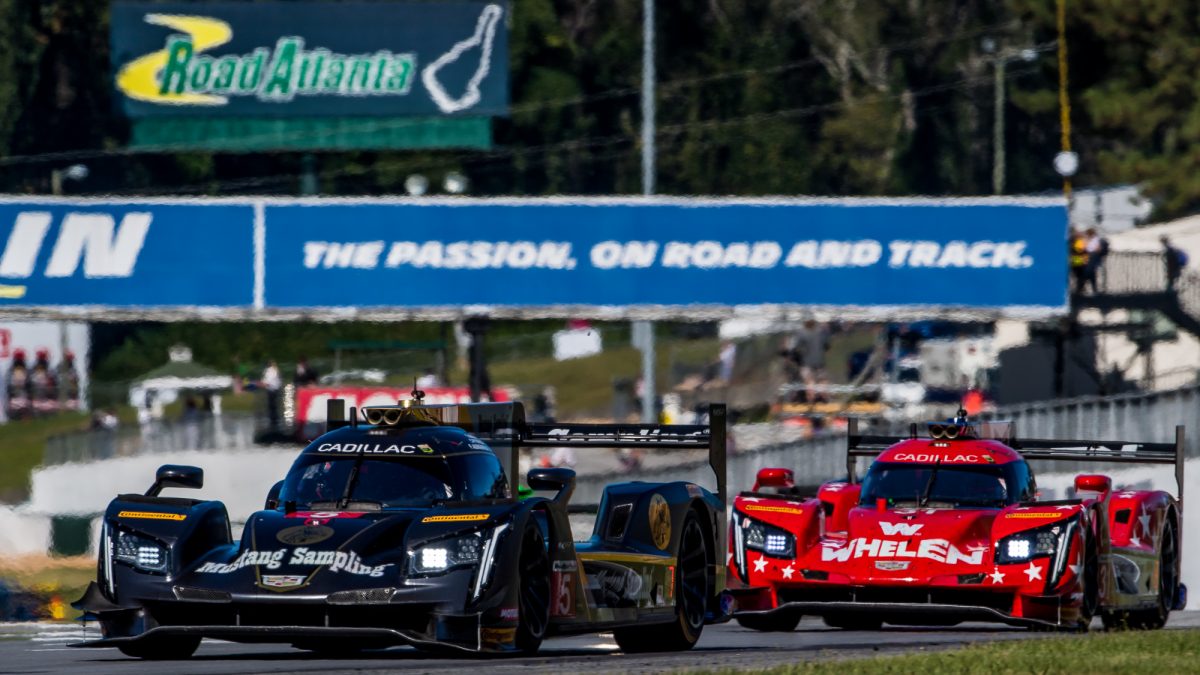 BRASELTON, Ga. (13 October 2018) – After winning the season-opening Rolex 24 At Daytona, Mustang Sampling Racing came only one turn shy of bookending the IMSA WeatherTech SportsCar Championship, running out of fuel virtually in sight of the checkered flag for Saturday’s 21st Motul Petit Le Mans after 10 hours of intense racing at Road Atlanta.

Filipe Albuquerque dominated the final two hours in No. 5 Mustang Sampling Cadillac DPi V-R co-driven by Christian Fittipaldi and Tristan Vautier, pacing the field twice for 38 laps after a pair of on-track passes. He passed Jordan Taylor out of Turn 3 to take the lead with just under two hours to go, and led through his final pit stop. Albuquerque then passed the Nissan of Pipo Derani with 27 minutes left and led the field through the final lap.

“When Felipe came out of Turn 7 [on the last lap] I thought we had it,” said Fittipaldi, who joined Albuquerque and Joao Barbosa in winning the season-opening Rolex 24 At Daytona. “I thought that was it, we only had the straightaways and it would be OK. But then he started having a misfire down the straight and unfortunately, not only the 10 (winner Jordan Taylor) but a few other cars went by and we missed out on even being on the podium.”

Albuquerque also won at Long Beach with Barbosa, who did not drive at Petit Le Mans after fracturing a rib in a lap one incident at the most recent event at WeatherTech Raceway Laguna Seca.

“We really have had bad luck in the second half of the season,” Albuquerque said. “It was very frustrating. We had problems early in the race, but we recovered and came back to the lead. The car was just brilliant from Lap 1, so I hated to have to race to the fuel at the end. We thought we had it, but apparently, we couldn’t catch it. One corner, that’s all it was, and to not even get a podium is very hard. Everybody did great, and Tristan (Vautier) did an amazing job, jumping in and helping us. I guess it was just not meant to be.”

While they did not lead the race during the opening eight hours, Albuquerque, Vautier and Vautier kept the team in contention, with each driver running as high as second.

Vautier was available to fill in on short notice due to his regular team – Spirit of Daytona Racing – not participating in the finale.

“We were so close to winning Petit!” Vautier said. “It was very tense, those last moments. Filipe drove an amazing race, getting into the lead, and then driving to those fuel numbers. We were that close, one or two corners from winning Petit Le Mans. Just an amazing experience with the team. I’m very grateful they gave me the call to come and jump in. It’s a shame we couldn’t bring it back in a podium position, but thank you to the team for an amazing job. It’s an incredible organization. Thank you to Filipe, Christian and Joao for being so welcoming. I’m happy for the Action Express team as a whole, because the No. 31 won the championship and that was the main mission today. I’m disappointed, but very grateful.”

The finale was bittersweet for Fittipaldi, who stepped aside from regular driving duties to serve as Action Express Facing’s sporting director. The 2019 season-opening Rolex 24 At Daytona will be his final IMSA Prototype race.

“Congratulations to the Whelen guys for winning the championship, it was an awesome run,” Fittipaldi said. “We were strong this year as well, but we just were unfortunate a few times, and today was one of those times. But this is a solid group of guys, we’ll turn the page to a new chapter and try and win Daytona again to start the new season.”