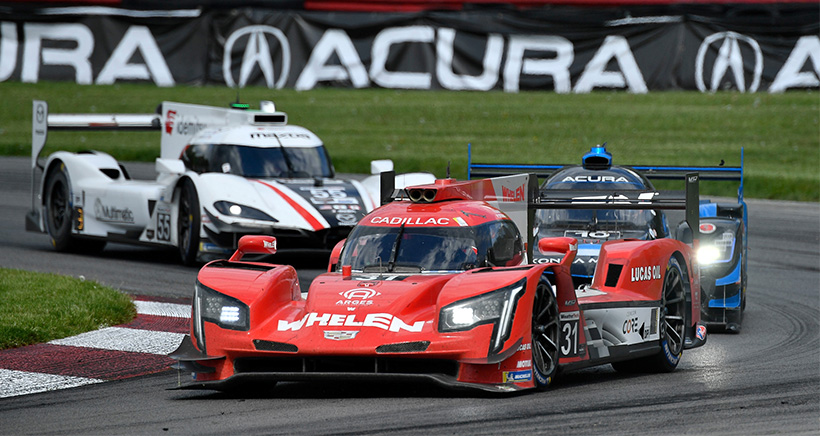 DAYTONA BEACH, Fla. – So close and yet so far. Again.

Felipe Nasr, driving the No. 31 Whelen Engineering Cadillac DPi-V.R, stormed up to the rear wing of the No. 10 Konica Minolta Acura ARX-05 but failed to make the winning pass on the last lap of Sunday’s Acura Sports Car Challenge Presented by the TLX Type S at Mid-Ohio Sports Car Course.

Taylor and his teammate Filipe Albuquerque scored the IMSA WeatherTech SportsCar Championship win by a razor-thin margin of 0.368 seconds over Nasr and Pipo Derani, who tried to find the silver lining.

“This was the best result of the year,” Derani said. “It’s just a shame for us (to finish second).

It was a day of highs and lows for this team, which has yet to score a victory through three races this season.”

The No. 31 Cadillac started third and held ground until making contact with the No. 28 Alegra Motorsports Mercedes-AMG GT Daytona (GTD) sedan coming out of the Carousel, just 20 minutes into the race. The contact forced Derani off track into the grass just before the front straight. As a result, Derani lost two positions to fifth.

The team received a break when the day’s only full-course caution came out with an hour left in the two-hour, 40-minute race. Just before IMSA officials called for the yellow, Nasr brought the No. 31 Cadillac to pit lane for fuel and tires. With the rest of the Daytona Prototype international (DPi) field forced to wait until pit lane was opened under the caution, Nasr was able to stop again with them for a splash of fuel and leave the pits in first place.

The restart with 45 minutes left proved critical to the outcome of the race. Taylor knew his best chance to win was to get around the No. 31 as soon as possible.

“That first lap (on a restart) is really the best opportunity where there are the biggest margins to make something happen,” Taylor said. “Just from my perspective, it looked like he had a lot more (debris) pickup on the tires than I did. I could see it flying off and going into Turn 4 (when) he ran a little wide.

“We weren’t going fast, we were both going pretty slowly, but his car just didn’t turn and went to the outside,” Taylor added of Nasr. “He raced very clean and very fair. He didn’t make it easy, but it was a good, fun battle. But as soon as I got by, I thought, ‘Man, now the work starts to stay ahead and save fuel and all the rest of it.’”

Nasr spent the final 37 laps right behind the No. 10 Acura, fighting for position while trying to save enough fuel to make it to the checkered flag while hoping the Acura would have to stop for a splash. Unfortunately for the Cadillac, that didn’t happen.

“We lost the race on the restart, especially where we restarted ,” Derani said. “We just couldn’t do anything. We had to save a lot of fuel. It’s a good points finish. It’s the first podium finish for us.”

“That was the name of the game – saving fuel,” Nasr said. “I have to credit Whelen Engineering Racing. They did an awesome job on strategy, especially on getting a clear track and having enough fuel to go to the end. But I have to say it was a little too extreme. That made me lose that position. We wanted to win that race. It was hard to do everything at the same time – save fuel, keep temperature in the tires.”

Sunday’s result marked the second straight year at Mid-Ohio that an Acura co-driven by Taylor held off Nasr and Derani in the No. 31 Cadillac for the win. Last year’s margin was 0.607 seconds.

“I’ve been getting a little stressed in the last three years,” Taylor admitted. “It’s the No. 31 hounding us, and they are really good here as well. They’ve got something figured out as well, but we’ve been able to hang on the last few times.”

The next WeatherTech Championship race comes at the home of Cadillac, the Chevrolet Sports Car Classic at the Detroit Grand Prix. The 100-minute race airs live at 5 p.m. ET Saturday, June 12 on NBCSN and IMSA Radio (Sirius 219, XM 202, SiriusXM Online 992).