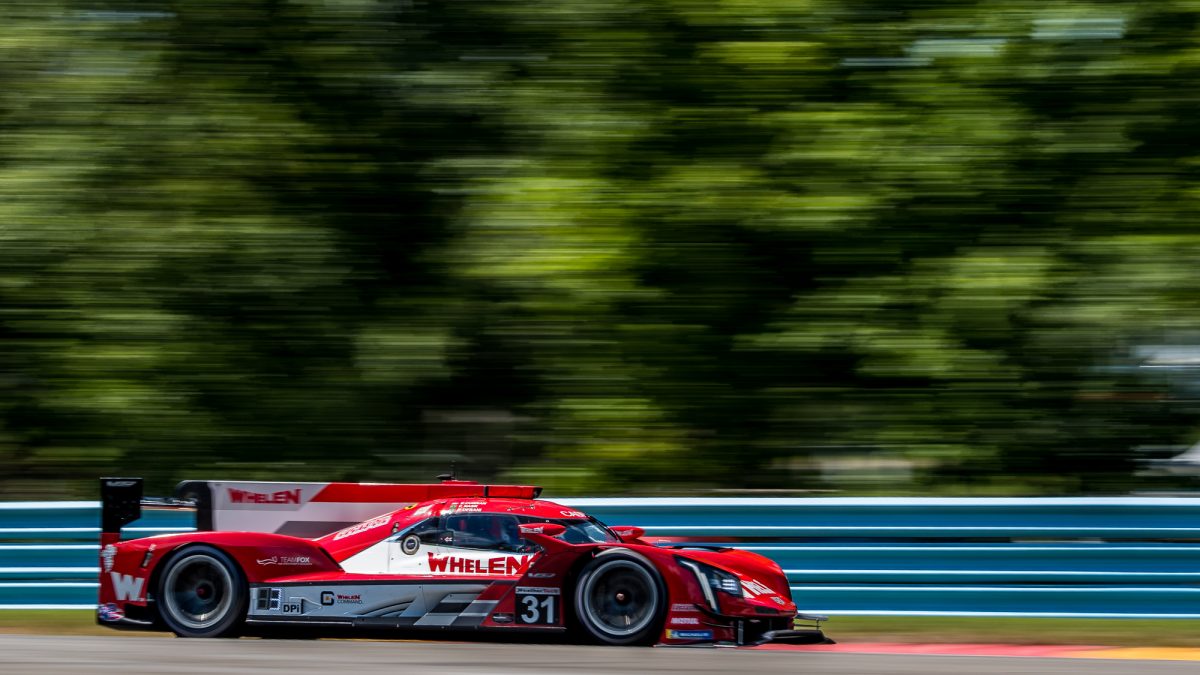 WATKINS GLEN, N.Y. (30 June 2019) – Despite suffering from a puncture in the opening moments of the six hour race, Whelen Engineering Racing fought all the way to the finish in Sunday’s Sahlen’s Six Hours of The Glen, minimizing damage in the IMSA WeatherTech SportsCar Championship battle. After losing three laps in an early incident, Felipe Nasr, Pipo Derani and Eric Curran fought back to finish seventh in the No. 31 Whelen Engineering Cadillac DPi-V.R.

“From the beginning, I felt that we had a good shot,” Nasr said. “We made up a position, and then the first caution threw debris across the track. When we took the restart, the car was handling really well but when I went through the “boot” I felt a large wiggle. As I was going into Turn 8 I heard a big noise come from the rear left of the car – that is when the tire went, making me the passenger from then on. We were lucky that our misfortune didn’t take out both Action Express cars. It was a racing incident that we just could not control.”

Running to the inside of teammate Filipe Albuquerque in the No. 5 Cadillac, Nasr went straight into a gravel trap. The team then lost additional ground on pit road due to the time required to fix the bodywork damage before being released back into the field.

“Combining that incident with the car not having the pace to compete with the front runners made for a tough day,” Nasr added. “I am not giving up, and we will turn around and focus on the next race in just a few days. After a race like this, it is the best thing that we get to turn around and race again next weekend and hopefully we have better day at CTMP.”

“Unfortunately, it was a tough day.” said Derani. “We have to be happy with seventh due to everything that happened on track. We were not fast enough to keep up. If we could have been able to keep it on the lead lap then maybe we would have had a fight at the end. It was just one of those days where things don’t go your way. We are going to look at bouncing back in just a week’s time.”

The early incident meant scoring no bonus points in competition for the Michelin Endurance Cup. The defending champions came into the event tied for the lead in the unique championship for the four endurance races on the WeatherTech Championship schedule, coming off a perfect showing in its recent victory in the Mobil 1 Twelve Hours of Sebring.

“Our race started out a little rough.” said Curran, who shared in the Sebring victory. “Nasr suffered a cut tire during his first stint that caused us to go a few laps down right away. There were not enough yellows throughout the day to gain enough back. My stint was like clockwork. It is great to be back in the Cadillac – it’s so much fun and I love driving it! It would have been fun to have a better run than finishing seventh but the guys will move on and keep fighting for the championship. I am already looking forward to getting back in the car at Petit Le Mans.”

Entering Round 6 of the season with a five-point lead in the DPi standings, the team now goes to next weekend’s race at Canadian Tire Motorsport Park running second, with a one-point deficit.

Next up is Sunday’s Mobil 1 Sportscar Grand Prix presented by Acura at Canadian Tire Motorsport Park in Bowmanville, Ontario, Canada.