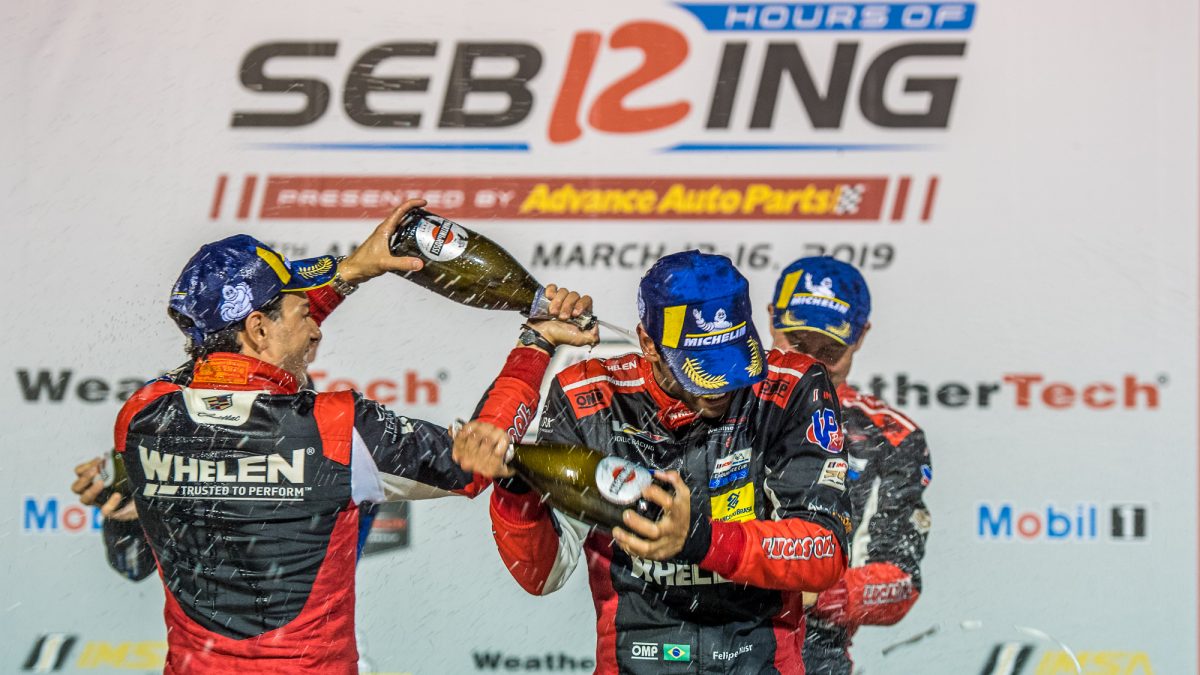 With a big exclamation point.

Pipo Derani, Felipe Nasr and Eric Curran battled tooth and nail to dominate in the No. 31 Whelen Engineering Cadillac DPi-V.R, leading 249 of the 348 laps in the 67th running of the IMSA WeatherTech SportsCar Championship event.

They survived a number of challenges, including rain and poor visibility at the start; extended stretches of green-flag racing; and an eight-minute sprint to the finish following the fifth caution period.

“Unbelievable,” said Curran. “We finished second here a couple of times and never got to the top step of the podium. My teammates were phenomenal. It feels so amazing to win this race after 15 years of trying. The Whelen Cadillac is amazingly good here. It was really good here last year, and it was just as good or better this year, maybe a little better.

“The 12 Hours of Sebring is a huge deal for any sports car driver, and I’ve been trying to win this race for a long time. Especially coming off Daytona, where we almost got it, to win this one is a big deal. I’ve driven for Sonny Whelen for 10-plus years, winning two championships and a lot of big races. To get this one means a lot. It’s special to get Whelen Engineering that exposure, leading so many laps, so this is for him.”

Derani won the race in 2016 as a rookie and in 2018, and was pleased to once again claim the victory. He took Whelen Engineering with him to the top step Saturday night. The only other driver to win Sebring three times in four years was American Formula One champion Phil Hill, who did so in 1958, 1959 and 1961.

“Unbelievable job!” Derani said. “It was tricky at the beginning of the race, with the rain, but I managed to move my way from fifth into first and open a gap. But today was just one of those days, where everything clicked and nothing went wrong. Big thanks to my team. The Whelen Engineering Cadillac is an amazing car and I’m really happy to have won three times in four years. I wouldn’t be able to do that without the job the Whelen Engineering Racing guys have done behind the scenes, and Felipe at the end and Eric keeping the car in front. What a day!”

Whelen Engineering took second in 2016 and 2018, and also was third in 2017 prior to finally achieving the top step.

“Today was a super challenging day and I am so proud of the job by the entire Action Express team,” Nasr said. “They gave us an amazing car to drive today, in all the different conditions from wet to dry to drizzling, and Tim Keene was superb with the calls. Pipo had an amazing start in the rain, that was a really tricky part of the race and he nailed it. He was able to put the car into the lead and just walk away with it, and Eric stabilized the lead and kept the car going forward. In the end, the job for me was to get to the finish line. Those last 20 minutes were super intense, trying to hold off the 10 car, they were pretty fast. I’m so happy we got the victory and nailed every hour for the endurance championship as well. A perfect day of racing!”

After the race began under caution due to rain, Derani needed only six green-flag laps to take the lead. He led up until the two-hour mark, when he was the first driver to pit to switch from rain to slick tires on the damp track.

“To be honest, I wasn’t quite sure (about going to slicks),” Derani said. “The track was wet, but at the same time, I could feel the tires were starting to go away. It was a really great job by the team to put me on slicks. I couldn’t give them an answer, but they made the right call there. It was really difficult early with a lot of water and spray.”

The fourth caution of the event during the 10th hour erased a 48-second lead for Derani, allowing Jordan Taylor in the Rolex 24 At Daytona-winning Cadillac to close in. Nasr took over and pulled away on the restart, only to see Taylor get another chance with a final caution. Nasr again prevailed in an eight-minute sprint, winning by 1.030 seconds in the closest non-managed finish in event history.

Another turning point came shortly before the eight-hour mark. Nasr passed the No. 10 Konica Minolta Cadillac not only to lead the race, but to capture the five-point Michelin Endurance Cup bonus. The Whelen Engineering team won all three segments. Entering the race with a five-point deficit, the No. 31 team is now tied with the No. 10 in a bid to give Action Express Racing its sixth consecutive victory in the unique competition – and second straight for Whelen Engineering.

“The team did such a great job today,” said sponsor Sonny Whelen. “It was an amazing day – rain, then sun, then running into darkness. Amazing!”

“This was a great race, and Sebring is just such a big event that this feels great,” said team owner Bob Johnson. “And to have both team cars on the podium is even better.”

Next up for Whelen Engineering Racing will be the Bubba Burger Grand Prix of Long Beach, set for April 13.