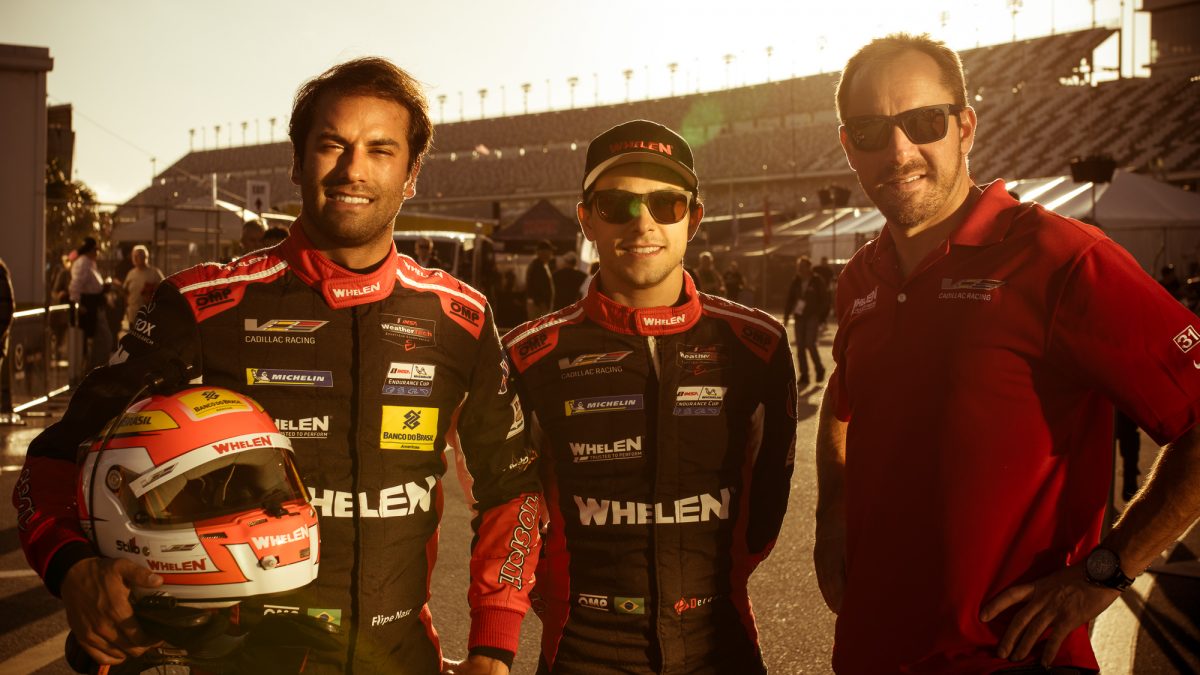 SEBRING, FL (11 March 2019) –  Having won the 2018 IMSA WeatherTech SportsCar Championship Team and Driver Championships, as well as the Michelin Endurance Cup title, Whelen Engineering Racing is focused on a repeat performance in 2019.

After finishing on the podium for the past three years in the Mobil 1 Twelve Hours of Sebring, the Whelen Engineering Cadillac team will look to move up to the top step as IMSA stages round two of the 2019 season this weekend.

Pipo Derani – Sebring winner in 2016 and 2018 for Extreme Speed Motorsports – will join Felipe Nasr and Eric Curran in the No. 31 Whelen Engineering Racing Cadillac DPi-V.R.

The team is looking to build on momentum following a second-place finish in the 2019 IMSA WeatherTech SportsCar Championship season-opening Rolex 24 At Daytona.  Horrendous late-race conditions cost the team a chance at victory after the race was red flagged and called early as the team fought for the lead shortly before an event-ending red flag waved with two hours remaining on the clock.

With experience in everything from GT cars to the top-flight DPi Cadillac Prototypes, Curran has consistently found his way to the Sebring podium no matter what he’s driving. But with a new driver line up and a strong start to the year, the American racer is looking for a breakthrough victory next Saturday.

“I’ve had strong runs at Sebring the past few years, finishing on the podium the last three years, and I can’t wait to go back there and try to get up on the top step!” said Curran, who is racing in the four Michelin Endurance Cup rounds this season. “Sebring is a super-tough race, running from day into darkness with all kinds of changing conditions. I love the new Super Sebring poster with the No. 31 red and white Whelen Caddy running up front. I feel that’s a great omen, and look forward to finishing in front there this year with Felipe and Pipo. The 12 Hours of Sebring is one of America’s classic races, and it would be fantastic to come home with the trophy for all the guys at Whelen Engineering.”

Derani’s rookie victory at Sebring came at the expense of the Whelen Engineering team. Dane Cameron was leading the 2016 race in the No. 31 Corvette Daytona Prototype co-driven by Curran and Scott Pruett, when Derani made a thrilling pass for the lead with less than five minutes remaining.

“I can’t wait to go back to racing and especially at Sebring where I will try my third win in four years,” said Derani. “I am really looking forward to continuing our championship fight with Whelen Engineering Racing after finishing second at Daytona. Our team is always looking for precision on how it operates a race weekend and what I saw at Daytona gives me an extra motivation to fight even harder to bring to the team the first win of the season. I am 100% sure we will be competitive and will give our maximum win this so important race.”

After finishing second that year, Whelen Engineering took third the past two years, with Derani also winning the 2018 event for ESM.

The Daytona round saw Nasr lead the race at the half-way mark to collect a five-point bonus towards defending its title the Michelin Endurance Cup.  The four additional points at the finish gave the team 13 points, putting them in second position heading into the race at Sebring. The unique endurance competition also includes the Sahlen’s Six Hours of Watkins Glen and 10-hour Motul Petit Le Mans at Road Atlanta. Action Express Racing teams have won the Endurance Cup for five consecutive years.