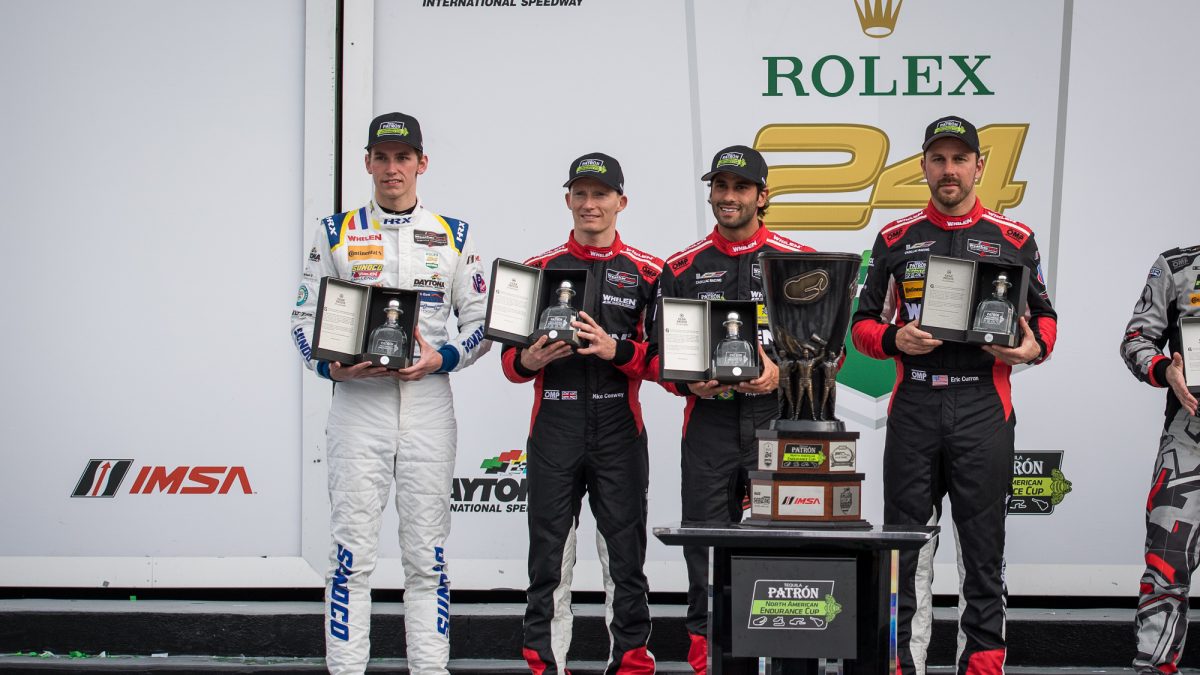 Denver, NC  (1 February 2018) There’s nothing like a little sibling rivalry.

Last weekend’s record setting Rolex 24 At Daytona saw a convincing team effort generate a 1-2 finish as Mustang Sampling Racing and Whelen Engineering Racing covered over 5,700 miles between them at Daytona International Speedway to score the two top spots on the podium.

The No. 5 Mustang Sampling Cadillac drivers (Christian Fittipaldi, Joao Barbosa, Filipe Albuquerque ) emerged with the trophy Rolex Daytona watches for the victory, but it was the No. 31 Whelen Engineering Racing lineup of Eric Curran, Felipe Nasr, Mike Conway, and Stuart Middleton who claimed the Daytona round of the Tequila Patron North American Endurance Cup (TPNAEC).

The TPNAEC goes to the team that delivers the best performance through segments of the four endurance events on the IMSA WeatherTech calendar—Rolex 24 At Daytona, Sebring 12 Hour, Watkins Glen 6 Hour, and Petit Le Mans. Teams are scored at intervals through each of the four events, not just at the race finish.

So while it was the Mustang Sampling Racing entry out front for the checkered flag at Daytona, the Whelen Engineering Racing squad held the advantage over the course of the 6,12, 18, and 24 hour marks to claim the TPNAEC win for the Daytona round.

“As well as having a great result with the P2, we really pulled off that Patron Cup for Daytona so that was a nice result for us,” said Curran. “As drivers, we are just focused on the race and it is Tim Keene ( Whelen Engineering Performance Coordinator) and the guys on the pit stand that are making the calls to make sure we are in the best place we can be at each of those segments. So hat’s off to them and to Patron (Tequila), I love what they do for the series and for this championship.”

With the Whelen Engineering entry leading the TPNAEC standings, it sets the stage for another internecine battle for a team that has a record of intra-squad battles, having dueled to final laps of the the 2015 and 2016 IMSA seasons for the championship title. And with the Mustang Sampling effort having claimed the TPNAEC battle since the inception of the title (2014, 2015, 2016, and 2017), the stakes are high.

“It would be amazing to switch it up and have us take it!” said Curran of the Patron Cup. “There is no question, the five car is such a big competitor to us. So it is important to win as much as we can and we’ll have to be in front of our teammates to do that. They are so strong, it will be hard to knock them off but it is great to have your teammates pushing you.”

In the end it was a team effort, as the four-driver line up saw some stand-out performances from each of the racers. Nasr set the fastest lap of the race, Conway raced himself back on to the lead lap at one point in the event, and young Middleton astounded with his composure under challenging circumstances as he raced the red and white Whelen Engineering machine across the line to take the checkered flag.

“Overall, the guys in this Whelen Engineering Cadillac just did a great job—it was a phenomenal get together of great drivers and a great team,” said Curran. “All of our teammates were pushing all race long. We had a couple things happen—I got spun once, Felipe (Nasr) got spun once—but as Gary Nelson (Team Manager) says, you’ve got to keep the wheels rolling and we did just that. Mike (Conway) was awesome and it is great he’ll be back with us in the long races again this year. Stuart (Middleton) really showed his stuff to get in the car and go to the finish, that’s a lot for a guy so young to do in his first race, so it was an awesome all around effort.”