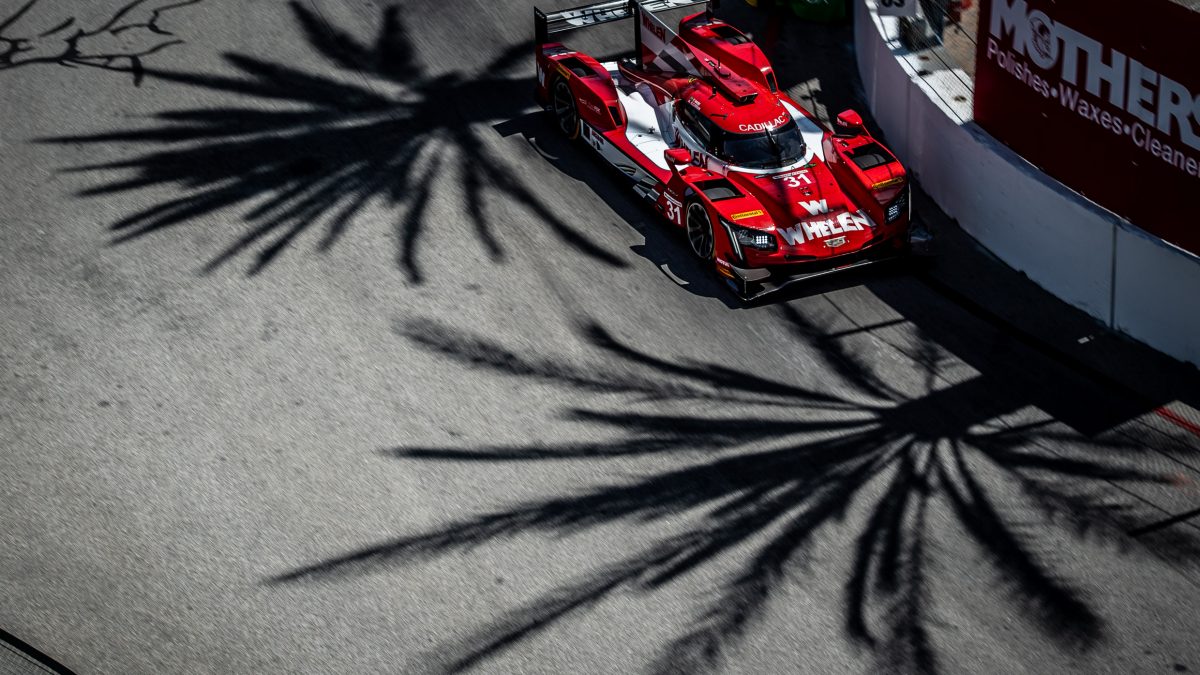 Long Beach, Calif. (14 April 2018) The No. 31 Whelen Engineering Cadillac DPi-V.R of drivers Felipe Nasr (BRA) and Eric Curran (USA) showed impressive race pace on Saturday but saw the chances of victory evaporate after contact from a competitor late in the race.

The team, which opened the 2018 IMSA WeatherTech SportsCar Championship season with a pair of podium finishes, rallied back to score seventh at the finish and will look ahead to the next outing at Mid-Ohio in May to get back on the IMSA podium.

After starting the race from the front row, Nasr moved right into the slipstream of the leader at the drop of the green flag. Giving chase for 20 laps, the young Brazilian made the move to the point on the 21st lap with a convincing pass for the lead. A full course caution for a stranded car saw the field pack up as several entries took to pit lane for fuel and tires.

With just 100 minutes of racing to navigate, the Whelen Engineering Racing squad elected to keep the track position and maintain the lead. On the restart, Nasr was once again right on the pace, besting the existing race track record with the fastest lap of the race. Growing his advantage to over 10 seconds, the team was looking to convert that pace into a third consecutive podium. Taking to the pit lane on lap 37, Nasr turned the car over to Curran to take the controls.

“I did all I could to be honest,” said Nasr after his stint. “We had a fantastic start and I was able to stay right behind Juan Pablo (Montoya) for most of the beginning and managing the fuel at the same time. The handling of the No. 31 was just amazing today – we were probably the fastest out there. I knew my chance came when I was right behind him. About halfway through my stint I got past him and then it was just qualifying laps. I was able to open up the gap before handing the car over to Eric (Curran) and did the best that I could.”

On the outlap for the 2016 IMSA champion, Curran was hit in the back by a GTLM machine, knocking the car into the wall and damaging the front of the Whelen machine.

The incident saw the No. 31 drop to 17th overall, but Curran fought back to claim seventh at the finish.

“We had a long pit stop to get all of the fuel in the car,” Curran said. “Going out on cold tires with lack of front grip and with the GTLM cars being a little quicker than us early in a run a guy dinged the back of me and I clipped the left front and that affected the dive plane. We went for a one-stop strategy and I am not sure that was the answer today. It is too bad. I kept changing the sway bars and had a good car at the end of the race. Congrats to the five car, they did two stops we did one and they beat us. That is the tale of the day for us!”

The No. 31 Whelen Engineering Racing machine will return at the next IMSA WeatherTech SportsCar Championship event on May 6th at Mid-Ohio Sports Car Course.