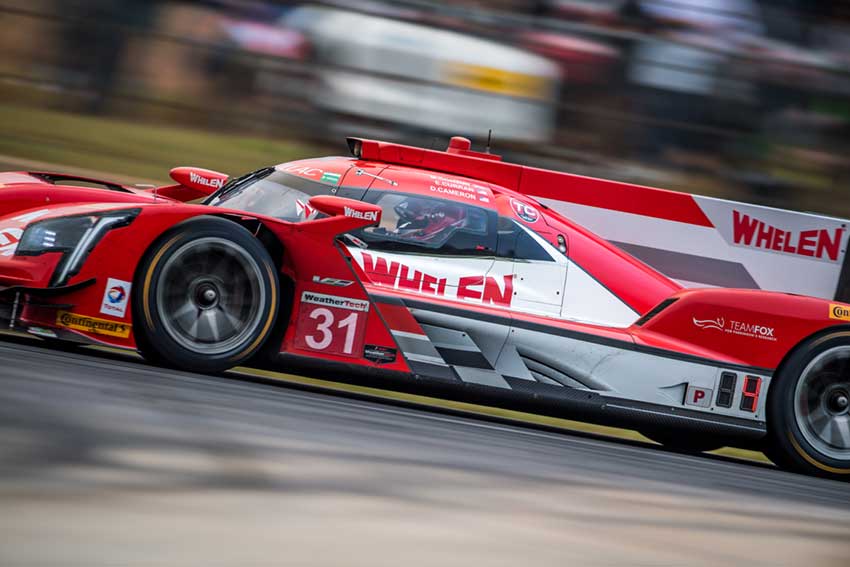 Daytona Beach, Fla. (22 January 2018) Whelen Engineering Racing will look to make a big start to the team’s 2018 IMSA campaign next weekend as the 2018 IMSA WeatherTech SportsCar Championship will kick off with the 56th running of the Rolex 24 At Daytona (2:00 PM ET FOX live coverage of Saturday’s race start) at the Daytona International Speedway.

The 2018 season will see the No. 31 Whelen Engineering Cadillac co-driven by Eric Curran (US) and Felipe Nasr (BR) through the full IMSA schedule, which will feature both sprint and endurance events on a collection of the best tracks in North America. Curran has long been a winning fixture in the Whelen Engineering effort, while Nasr returns to the team for his first full IMSA WeatherTech championship season, having raced with the squad in the 2013 Rolex 24 At Daytona.

Whelen Engineering Racing will welcome the 2018 Sunoco Whelen Challenge winner Stuart Middleton (UK) to the lineup for the Rolex 24, as well as Mike Conway (UK)  for the Daytona, Sebring, and Petit Le Mans rounds of the event schedule.

The team is proud to once again carry the red and white colors for Whelen Engineering.  After starting in a garage in 1952 when George Whelen III invented the first rotating aviation beacon,  Whelen Engineering has emerged as a continuing American success story. Based in Connecticut, Whelen is a leader in automotive and emergency vehicle lighting as well as in the industrial and aviation fields. Whelen, which recently announced the continuation of its designation as the “Official Warning Lights of NASCAR,” has a strong presence across motorsports including the Whelen Hall of Champions in the NASCAR Hall of Fame as well as with the NASCAR Euro Whelen Series.

The 2017 Rolex 24 At Daytona saw the Whelen entry targeting a strong start to its defense of the 2016 IMSA Team and Driver Championships. The team had to fight back from an incident in traffic that cost the effort several laps. Undaunted,  the No. 31 Whelen Engineering Cadillac returned to battle and covered 2,274-miles (639 laps) during the rain-plagued 24 event  for a sixth-place result. The team went on to break through for a victory at Canadian Tire Motorsports Park to notch its first victory with the Cadillac DPi-V.R platform.

As new teams and manufacturers join the series in the Prototype class, the 2018 IMSA season promises to be the most competitive and compelling yet. Under the guidance of Gary Nelson and with the integration of veteran Tim Keene as Performance Coordinator for the No. 31 Whelen Engineering Racing entry, the Chris Mitchum-directed program has focused on continuing to develop the team in preparation for the outstanding competition that is expected in 2018.

The Whelen Engineering Racing squad looks forward to utilizing the lessons learned in 2017 with the Cadillac DPi-V.R into another run at the championship starting with the Rolex 24 At Daytona.

“I think 2018 is going to be an amazing year,” said Curran. “I think all of IMSA’s hard work through the last few years is really coming to pay off. This DPi platform is really taking off and it is amazing to see 20 of these Prototype cars that are going to really  battle for the Rolex 24 this year. For sure it is the best cars, the best drivers, worldwide from F1, IndyCar, sportscar racing around the world. And then some of the best teams in the world as well so this will be superb for the fans. I think it is going to be  quite the event—having grown up watching the GTP cars and the World SportsCars, it is like that golden time right now so it is exiting to be a part of it. For the fans and for IMSA it is an amazing kick-off to the 2018 season. It will probably be the best one we’ve seen for a long time. The Whelen Engineering Cadillac was great in testing and hopefully we can be right in the mix at the finish here at Daytona.”

Former Formula 1 driver Felipe Nasr joins Action Express Racing full-time in 2018. With over 40 starts in the top-level Formula 1 category, Nasr finished fifth in his first-career F1 race in the Australian Grand Prix in 2015. It was the best ever result for a Brazilian driver making a Grand Prix debut. He also served as a test and reserve F1 driver in 2014 for WilliamsF1. A multi-champion across several European open-wheel divisions, Nasr first teamed with Action Express Racing in the 2013 Rolex 24 At Daytona after having scored a third place finish in his Rolex 24 At Daytona debut as a Sunoco Whelen Challenge winner in 2012.

“I wanted to be back here in IMSA and finally I am here,” Nasr said. “The team is really focused on the race. We all feel very confident in the car. Today in the qualifying session, we gave everything we had and finished first. The cars at the front are very close in time. I am pretty happy with the way the Cadillac is performing. When I ran here in 2012 it was one of the best experiences of my career. The IMSA championship is growing. There is such a strong field here, it is great for a racing driver to be competing at Daytona. I got a third place here, and now I want to go for the win.”

Mike Conway returns to Action Express Racing in 2018 as a Whelen Engineering Racing endurance driver for the Rolex 24, Sebring 12 Hour, and Petit Le Mans events. Conway has years of experience across several different racing platforms that include winning outings in IndyCar and World Endurance Championship competition as well as big performances in FIA Formula E.

“I am excited about the race,” said Conway. “This year will be bloody hard. There are 20 cars that will be fighting for the win. We will need to race well, make smart moves and be there at the end to go for the win. That is easy to say, but to do that takes a lot of team work and luck. Hopefully we can have another good run. We have strong drivers in the Whelen Engineering Cadillac. I think we have a good chance to go for the win. It is a little easier the second time around. The team is used to the car and drivers. There are some newcomers here, but with experienced teams running the cars. It is going to be interesting. I think it will be a close one. There are several cars within a few tenths. The competition will be good, that’s what the series needs.”

The Ashington, Northcumberland native is recognized as a British Racing Drivers Racing Club (BRDC) ‘Rising Star’ who most recently earned the 2017 British GT4 Championship – in his first year in GT4 competition.  That honor was capped off by being named the winner of the 2017 Sunoco Whelen Challenge, which earned him the opportunity for a drive the No. 31 Mustang Sampling Racing Cadillac DPi-V.R in the Rolex 24 At Daytona to kick off the 2018 IMSA WeatherTech SportsCar Championship season.

“The Cadillac is one amazing machine,” Middleton said. “It is very different from what I usually drive in terms of power, grip and downforce. The car just goes. You really have to be on top of your game with one of these machines for sure. I am loving the experience of driving the Cadillac. It will be a whole different experience for me in the race. I have never driven at night or run in a 24-hour race before. There a few different things to learn. I am not dreading it or concerned, I just want to learn as much as I can from my teammates and the team. I am really excited and looking forward to the race.”