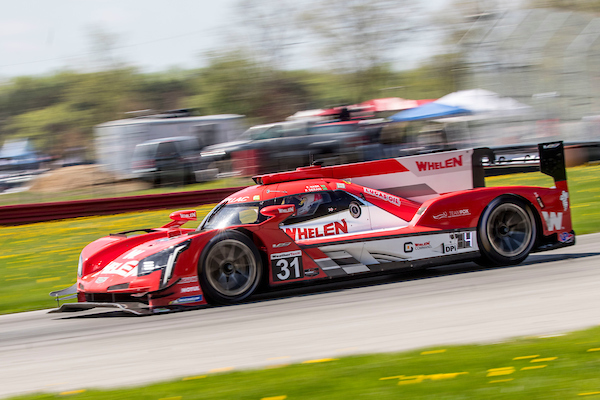 LEXINGTON, Ohio (5 May 2019) – Whelen Engineering Racing finished fourth in a hard-fought race in Sunday’s Acura Sports Car Challenge at Mid-Ohio. Denied in a late-race bid to take a podium finish, Felipe Nasr and Pipo Derani came away with a fourth-place finish for the No. 31 Whelen Engineering Cadillac DPi-V.R.

Unofficially, the Whelen Engineering team expanded its lead in the IMSA WeatherTech SportsCar Championship point standings, and now leads by four points after four of the 10 race.

“In the big picture, we are coming out of Mid-Ohio with good points and building on this strong package we have with this Whelen Cadillac,” Nasr said. “I’m pleased, and looking forward to returning to Detroit and hopefully getting back up on top there again.”

The Whelen Engineering Cadillac ran in the top five throughout the race.

“I felt overall it was a good day in the car,” Nasr said. “We started fourth and Pipo had a good start, getting up to third. But we didn’t have the pace of those guys up front. We did all we could-every stop from the team was perfect.”

Nasr managed to run down and pass the third-place Mazda with six minutes remaining in the two-hour, 40-minute event, but the move was disallowed due to a local caution flag.

“I had that Mazda in my sights to get on the podium, but I got held up for several laps by a lapped car and by the time I caught up to fight for a podium, we had the issue with the pass in yellow zone,” Nasr said. “I had given the position back already, but we still had to serve the penalty. So that cost us a bit.”

Derani started the race in fourth and managed to hold that position throughout his run, briefly running as high as second.

“Unfortunately we didn’t have the car to fight for the top step, but it is one of those days where you think about the championship,” Derani said. “So it was positive in that regard. We finished the race with some good points and we will take it from here. It was clean weekend for us, always thinking about the championship and we will go on to Detroit. Hopefully we can be as strong as the team was there last year!”

The Whelen Engineering team returns to Detroit’s Belle Isle Circuit as defending winners of the Chevrolet Sports Car Classic, which will be held on Saturday, June 1.