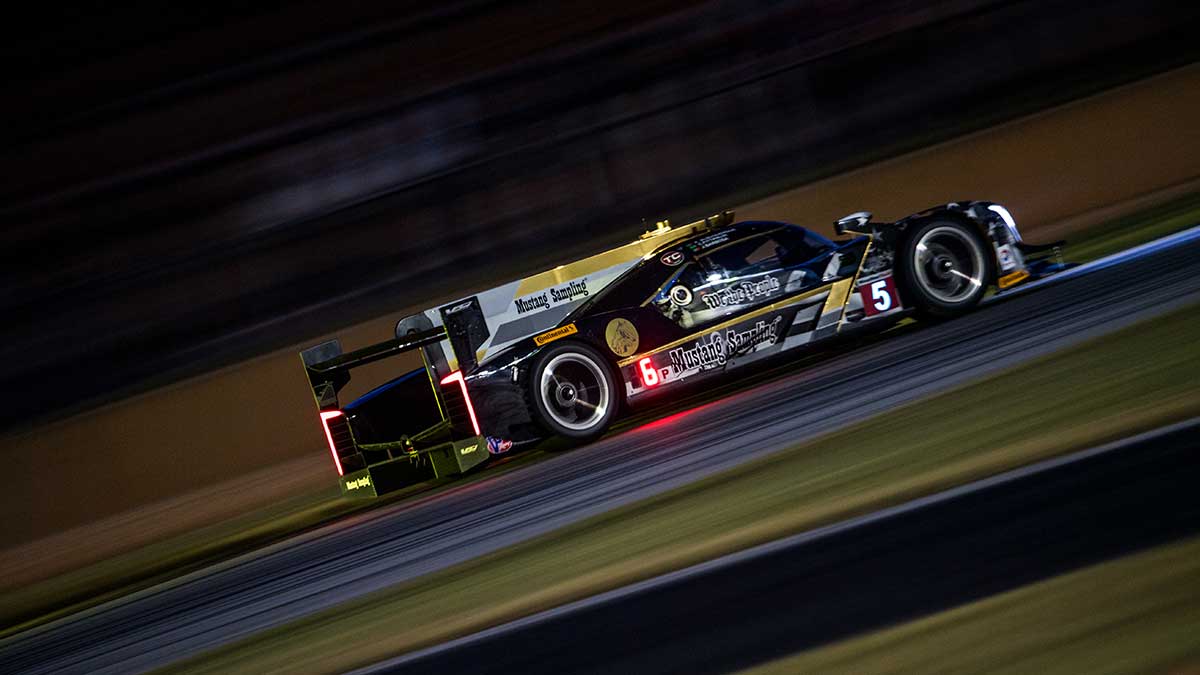 Braselton, Ga. (7 October 2017) – The No. 5 Mustang Sampling Cadillac DPi-V.R of Christian Fittipaldi, Joao Barbosa, and Filipe Albuquerque secured the 2017 Tequila Patron North American Endurance Cup (TPNAEC) on Saturday in the Motul Petit Le Mans. The team led the driver and team standings by two points ahead of the race start and clinched the championship after four hours of racing at Road Atlanta.

The championship is the fourth consecutive MSA WeatherTech SportsCar Championship TPNAEC title for the team, demonstrating strength in both preparation and pace from the Denver, North Carolina-based team. Mustang Sampling Racing clocked 401 laps of the 2.54-mile circuit on Saturday, as the team has now completed 20,733.18 miles of racing in TPNAEC events since the long distance championship launched at the 2014 Rolex 24 At Daytona.

Having secured the title early in the race, the team set its sights on an another overall victory to follow up on the triumph at Watkins Glen International earlier this year. A competitive and often combative 10 hour race saw the squad executing on both sides of the pit wall, with rapid pit stops, a strong race pace, and heads-up race strategy.

With just 10 laps to go as the Mustang Sampling machine held the lead, that ambition was thwarted when IMSA determined that the No. 5 had created an unjustifiable risk while racing through traffic late in the race. A 60 second stop and hold penalty eliminated the opportunity for a race win as the Mustang Sampling entry was scored fifth at the finish.

It was our main goal. We’d love to have won the Petit Le Mans as well. I thought we had it – it was very close. To win four in a row with the Tequila Patron North American Endurance Cup championship – that’s a tremendous accomplishment and we couldn’t be more proud of that. Now we are going to go for five!

“Four times in a row it is a huge accomplishment and it came from a massive effort from the whole team,” said Fittipaldi, who has been named Sporting Director for the team for the 2018 IMSA season. Obviously for the team and all the preparation—it boils down to Action Express doing an awesome job. To think that we managed to nail it four in a row, it’s pretty amazing and very cool. In the last four years, there were eight championships available and we won six of them (with the No. 5 Mustang Sampling), and Action Express won seven of them!

“We are happy to win this TPNAEC this year and hats off to the No.10 car guys on their overall IMSA championship as well. They did a great job particularly at the first half of the season. We will regroup and learn from our mistakes, emphasize what we did well and then come back to be even stronger in 2018.”

Though thrilled with the TPNAEC result, Barbosa, who has 21 IMSA wins to his credit, couldn’t help but want for more.

Albuquerque, who will drive full-time for the team in 2018, anchored the No. 5 Mustang Sampling Cadillac DPi-V.R to the checkered flag.

“It was disappointing in the end,” Albuquerque said of the penalty. “We won the TPNAEC title in the middle of the race and then we were going for the win. In the end it was very wild. On that restart, I drove hard, we were banging wheels all the way to the last corner, mixed in with a lot of GT cars. I don’t think I drove differently than any other lap so I don’t understand the penalty. In the end we go home with the endurance championship which is good for the team.”