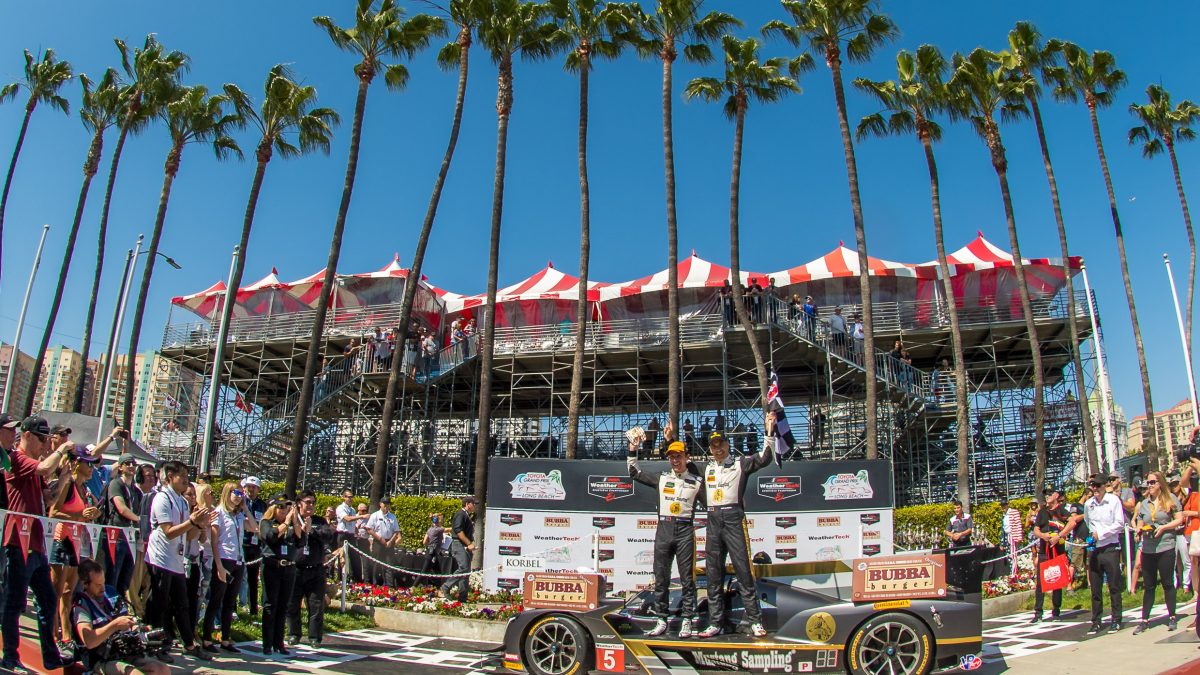 Long Beach, Calif. (14 April 2018)  After the racing gods handed the No. 5 Mustang Sampling Cadillac DPi-V.R a setback at Sebring, the team came roaring back to score a convincing victory on the streets of Long Beach on Saturday with drivers Filipe Albuquerque (PRT) and João Barbosa (PRT).

The 100 minute race is the shortest of the IMSA WeatherTech SportsCar Championship, and marks round three of the 2018 schedule. 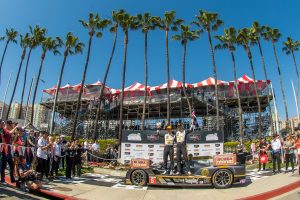 Barbosa opened the race on the tight twisty 1.9-mile circuit from fifth on the grid, and was able to balance the pace he needed to hold on to his fifth place starting position with the fuel economy that the team was asking for the fuel strategy to work out.

A full course caution on lap 22 saw the No. 5 Cadillac take to the pits on lap 24 with Barbosa turning the car over to Albuquerque on a rapid swap that included a full load of fuel and four new Continental tires.

Making his debut on the street circuit and first-ever IMSA sprint race start, Albuquerque soaked up the challenge of every lap as he began to reel in the leader and make forward progress.

Passes for position on laps 32 and 38, and then a quick final run through pit lane for a final stop saw the Mustang Sampling Racing colors out front once again on lap 40. After building an advantage for nearly ten laps, the lead was erased with a lap 49 caution. But the pace continued to be strong on the restart as Albuquerque held the point all the way to the checkered flag. 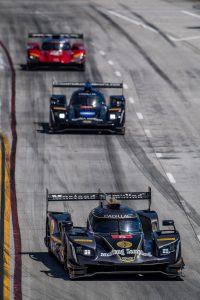 The victory is the second of the season for the Mustang Sampling squad (Rolex 24 At Daytona) and the 20th for the Action Express Racing organization.  The No. 5 Mustang Sampling Cadillac DPi-V.R has now moved to the top of the provisional points standings.

“It was an interesting race,” Barbosa said. “Qualifying didn’t go so well, but the team made some changes to the Cadillac for the race and it was really good. I was able to save quite a bit of fuel compared to the guys in the front during my stint. That was our strategy. The engineers just nailed it. The Cadillac DPi-V.R was really strong. We had great support from Mustang Sampling and the Continental tires were great all race. It was one of those weekends where you really didn’t know what to expect and it fell our way for the win!  It was a great points day and nice to get some back after a tough Sebring. The two pit stops were great and it was a good run for us.”

“Brilliant! Daytona was great and at Sebring we had a bit of a struggle,” Albuquerque said. “Joao (Barbosa) did a great job to start the race. This is my first time at Long Beach. At the beginning of my stint I could pass people. On the main straight it was hard to overtake, with the BOP we are down a little. The strategy for us by the team was perfect. We got in the lead and I was able to manage the race from the lead. We were unstoppable. We had a good Cadillac all weekend. This was my first time on a street course in a prototype and it was fun. When the yellow came out I was in the lead and feeling good. I had to concentrate on the restart, not getting too comfortable with these walls lining the track. The Nissan and Acura were battling behind me, so I just managed my race and brought the Mustang Sampling Cadillac home for the win.”

The team will look forward to the next outing as the IMSA WeatherTech SportsCar Championship returns to the Mid-Ohio Sports Car Course on May 6th. The team won the last time it competed at the track in 2013.