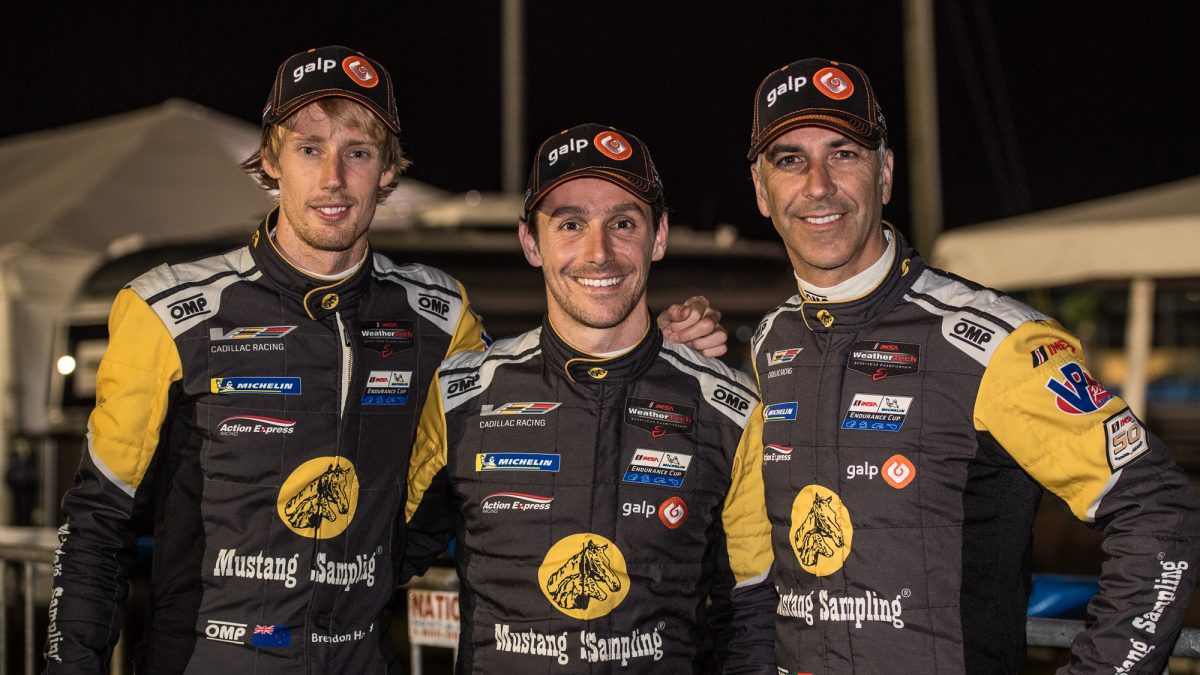 SEBRING, FL (16 March 2019) – Mustang Sampling Racing came away with its fifth podium in the Mobil 1 Twelve Hours of Sebring with a third-place finish in Saturday’s 67th running of the Central Florida classic.

Filipe Albuquerque, Joao Barbosa and Brendon Hartley combined to lead 69 of the 348 laps in the No. 5 Mustang Sampling Corvette DPi-V.R, coming up just 4.023 seconds short of a return to Sebring victory lane after 12 hours of hard racing.

The trio ran in contention through the event, running in the top five for the entire 12 hours.

The race began under the caution for 21 minutes. Once the green flag waved, the No. 5 Mustang Sampling Racing Cadillac needed only two laps for Albuquerque to make a pair of decisive passes on his way to leading the race. 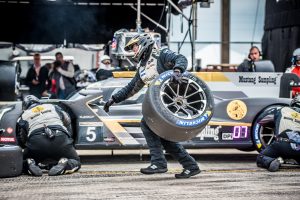 “It was quite tricky in the beginning – pretty wet, pretty slippery, and visibility was bad as well,” Albuquerque said. “But the car was just great, and once you learn to drive in those conditions, it was OK.”

Once the field began switching to slick tires at the two-hour mark, Albuquerque waiting for a few laps before coming in to change tires.

The race ran at a flat-out pace through the middle stages of the event as the track conditions stabilized and Albuquerque, Barbosa, and Hartley rotated behind the wheel of the Cadillac Prototype. A late race caution set up a final restart with 10 minutes to go, with Mustang Sampling Racing coming home in third.

“The result was a bit frustrating,” Albuquerque added. “We gave everything, but it simply wasn’t our day. It’s just hard to accept that. We led, but the 31 car was very competitive this weekend. We tried to come back, but they deserve the win.   All of us up front had a perfect race, but a couple of tenths made the difference. We were a touch quicker at Daytona but up front is where we belong. If we can stay away from problems, we’ll always be toward the front.”

Barbosa was part of Mustang Sampling Racing’s winning Sebring lineup in 2015, was happy to see the team return to the podium after electrical problems led to a frustrating opening to the season in the Rolex 24 At Daytona.

“The conditions were tricky, but Action Express did an unbelievable job during the race with its strategy for the 31 and 5 cars,” Barbosa said. “We were both in contention. But when it came to it, we didn’t have that extra bit of speed to be up there fighting in the end. A third-place finish is very positive, especially after Daytona, but we wanted a little bit more! We didn’t have the outright speed to challenge the 31 car for the lead, but it’s a great result and a great win for the team, with both cars on the podium.”

Hartley, a Formula One veteran joining the team for the first time, turned the team’s fastest lap, 1:48.029-seconds,  the fastest race lap of the event at the time.

“I really enjoyed working with Filipe and Joao and all the guys with the Mustang Sampling Racing Cadillac team,” Hartley said. “It was tricky in the beginning, to jump into a completely different car, and it definitely took one or two stints because I don’t have much experience in this car. I lost a place to Jordan [Taylor] early when I got caught sleeping and was not sure how much was in the tires, which was a little bit of inexperience with this car, but all in all, I felt good. I didn’t expect to end with a quadruple stint, and after yesterday’s [WEC] race, I was completely drained at the end of tonight. We didn’t have the pace of the other car, but both sides of the garage had a flawless race and we’re both on the podium, which is amazing.”

After the “Florida Classics” of 36 grueling hours of racing at Daytona and Sebring, IMSA next heads to the West Coast for the shortest race on the schedule – the one-hour, 40-minute sprint on the 1.968-mile street circuit at Long Beach, California, on Saturday, April 13.