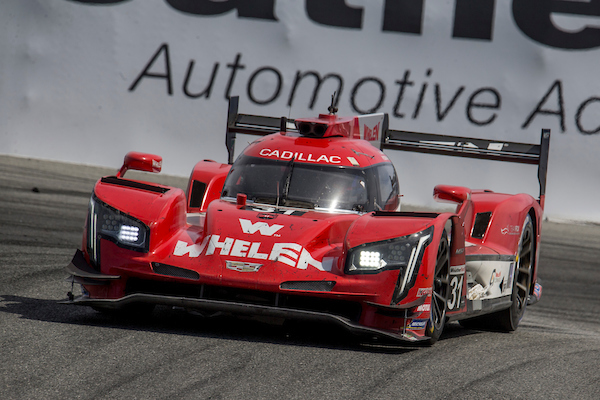 Pipo Derani took third position with 11 minutes remaining to join Felipe Nasr on the podium in the No. 31 Whelen Engineering Cadillac DPi-V.R. It was their fourth podium finish of the season, with the duo second in the title fight, trailing by 12 points entering the season finale at Road Atlanta.

“It’s great to get a podium here, after all we dealt with at the start,” said Nasr, who was fifth on the grid. “I got squeezed and pushed off the track on the exit of Turn 2 on the first lap, and from there, it was a race of recovery, to get back to the leaders. We were able to have good stints, but at the end, we were racing against the fuel. We were so tight on the margins and we just made it to the end perfectly. The team did a great job to get us right on the numbers to the end and Pipo did a great job of fuel saving, so I’m happy to get a third place and get back on the podium. But it’s not enough. We have one more race left and I want to win that race.”

Derani had a scare with 30 minutes remaining when he took a long excursion through the sand while running fourth. He gathered it up and returned to the track without losing a position, and then passed to take third with 11 minutes remaining in the caution-free race.

“It was an interesting race,” Derani said. “To be back on the podium is good, but to be behind the Acuras is not where we want to be. I think we did the best we could – we were the best Cadillac, and that is one thing we wanted to accomplish all year. It was a tough race; I had a difficult first stint. The second stint was better, the tires got a lot better. I had to fight the 10 car at the end, while trying to save fuel, which was interesting. He raced very hard, but luckily, we came out in front. We’ll take a podium now and take the championship fight to the last round. I’m proud of the race we did today, the entire Whelen Cadillac team did a great job.”

The IMSA season concludes with the Motul Petit Le Mans on Saturday, Oct. 12. In addition to the DPi season championship, Derani and Nasr seek to give the Whelen Engineering team its third consecutive Michelin Endurance Cup – which would be a perfect sixth straight for Action Express Racing since the debut of the WeatherTech Championship in 2014.