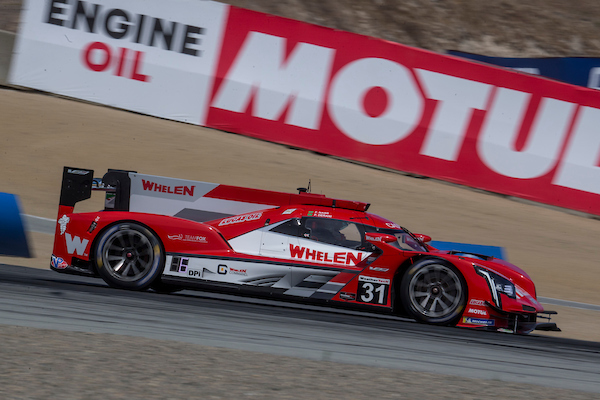 via imsa:
The No. 31 Whelen Engineering Cadillac DPi-V.R team of Felipe Nasr and Pipo Derani spent most of the race playing catch-up after some opening lap “argy-bargy,” but catch up they did. With less than 15 minutes remaining, Derani battled his way onto the podium, taking third place away from Renger van der Zande in the No. 10 Konica Minolta Cadillac.

It was a valuable move, as it gave the No. 31 team two more WeatherTech Championship points at a time of the year when every point matters most. Nasr and Derani are now 12 points behind Cameron and Montoya, 274-262, heading into the season-ending Motul Petit Le Mans at Michelin Raceway Road Atlanta.

“It was good to be back at the podium after a couple of rounds,” Nasr said. “It’s nice for the whole Whelen team and the No. 31 Cadillac. We got ourselves back on the podium. After a hard beginning of the race – we got pushed out after Turn 2 and we dropped a few spots – it was a recovery race and we were able to get ourselves in a position to push again. Once Pipo took over the car, it was a fuel-strategy race at the end. We were pretty tight on fuel at the end and he was still able to get the No. 10 car with a nice overtake there. So, being the best Cadillac, I think that’s the positive of the day.”

It will be tough for the No. 31 team to take the title away from the No. 6, but they can do it. All they need to do is win Motul Petit Le Mans and have the No. 6 finish ninth or worse.

“All I can say is I’m looking forward to Road Atlanta and I want to get a win,” Nasr said. “I want to close the year with a win for the team. That’s all I can look forward to now.”