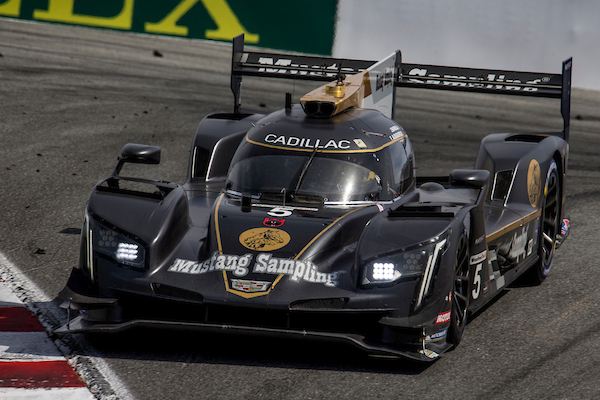 Filipe Albuquerque and Joao Barbosa co-drove the No. 5 Mustang Sampling Cadillac DPi-V.R to its best showing since winning at Long Beach in April.

Racing at Laguna Seca for the first time, Albuquerque passed one of the Mazda DPis to take fourth 10 minutes into the race. He held that position through his second pit stop at the one-hour, 11-minute mark, when he turned the car over to Barbosa.

“We fought hard,” Albuquerque said. “I had a good start and I made some good moves in the beginning to bring the fight to the 10 car a bit, to close the gap. We knew it was going to be a hard one, and the podium was in sight, but unfortunately, we couldn’t manage it. It was close, but it wasn’t for us. P5 was all we had today.”

Up to fourth early in his run, Barbosa ran the final hour of the caution-free race in fifth.

“You always want a little bit more, but we’re pleased with the race,” Barbosa said. “It’s been really competitive. Traffic plays a big role on a track like this; it’s so tight and there are not many places to overtake and you can lose time quickly. I was feeling good, even though I lost some in traffic to the leaders, but I felt we were competitive. It was frustrating that I wasn’t able to capitalize a little bit more on the track position but overall, it’s not a bad weekend. We improved from where we qualified so overall, we did a good job. Hopefully this will help us show that the Mustang Sampling car can be competitive and help us finalize details for next year.”

The IMSA WeatherTech Championship will come to a close with the 10-hour Motul Petit Le Mans at Michelin Raceway Road Atlanta on Saturday, Oct. 12.