Mustang Sampling Says Thank You to the Fans 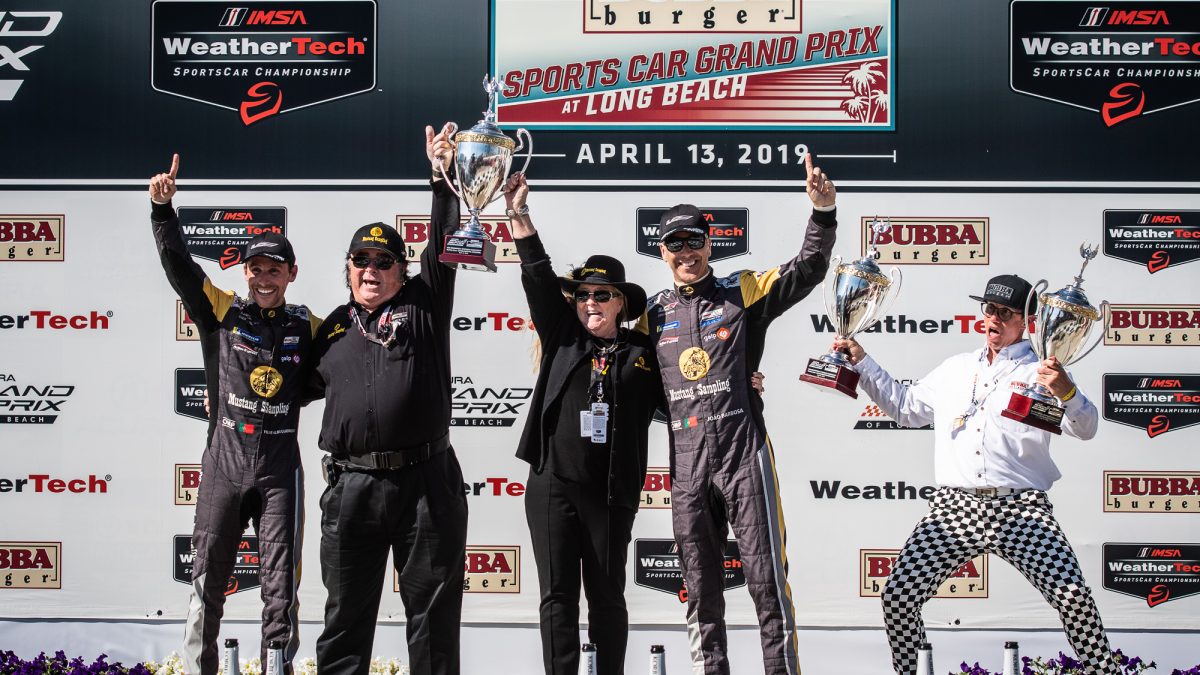 As the company looks ahead to the future, Mustang Sampling founders Ken and Brenda Thompson wanted to take a look back at the incredible success that the brand has enjoyed both off and on the track through its partnership with Action Express Racing.

It’s been a record-breaking run, winning IMSA driver and team titles; three consecutive Endurance Cups, with victories in all four endurance classics; piloted by a hall of fame roster of drivers.

Mustang Sampling’s involvement as primary sponsor of the No. 5 Corvette DP was announced on the eve of the 2015 Rolex 24 At Daytona. The new sponsor faced the challenge of joining the team that used a Rolex 24 triumph as a springboard to sweeping the inaugural IMSA Prototype, Team and Endurance Cup titles the previous season.

Fittipaldi, Barbosa and Bourdais won their next time out, though, taming the grueling 12 Hours of Sebring, leading 248 of the 340 circuits. The team went on to score six podiums in 10 races, winning the season-ending Petit Le Mans to repeat as 2015 IMSA Prototype, Team and Endurance Cup champions.

Mustang Sampling made it three straight Endurance Cups for Action Express in 2016, winning the Sahlen’s Six Hours of Watkins Glen in a season that saw them take podiums in seven of the 10 races. The season opened with a fourth-place finish at the Rolex 24, with IMSA’s all-time leading winner Scott Pruett making his final Prototype start in the Daytona classic he had won five times.

Action Express rolled out the new Cadillac DPi-V.R in 2017. Barbosa and Fittipaldi, joined by endurance specialist Filipe Albuquerque, repeated at Watkins Glen in addition to taking seconds at Daytona and Sebring. The  No. 5 Mustang Sampling Racing entry took its fourth consecutive Endurance Cup, the third under the Mustang Sampling banner.

Albuquerque joined Barbosa as primary drivers of the No. 5 Cadillac in 2018, with Fittipaldi promoted to the team’s Sporting Director in addition to driving in the endurance classics. The year opened with a victory in the Rolex 24, a dominant performance with Barbosa, Albuquerque and Fittipaldi leading 579 of the 808 laps. That was followed shortly by a triumph on the streets of Long Beach, California.

“Mustang Sampling fans, we hope you have enjoyed reading about the great accomplishments that the Mustang Sampling Team and Drivers have had in the five years we have had the honor to be with them. They are Fantastic, and the best TEAM in the Paddock thanks to the Action Express Management.

“By now I am sure most of our loyal fans have heard the Mustang Sampling program with Action Express will come to a close after Saturday’s Race a Road Atlanta, and it is with a heavy heart that this happens. The decision for Action Express is strictly for commercial reasons, a decision that is right for the team. They will continue to field the fantastic Whelen No. 31, we wish Sony Whelen & TEAM the very best, Sonny and Christine are two great people and we have loved racing with them for the past 5 years.

“Brenda and I are blessed to have been with such a great Team as Action Express, we have enjoyed every minute, every race with them, regardless of the results, we are all Family and always will be. So with a heavy heart we end a part of our racing career and wish the Action Express Team the very best. With this announcement we want our Mustang Sampling fans and followers to know we are actively pursuing a new venue to showcase the Mustang Sampling car again in 2020 at 24 Hours of Daytona and compete within IMSA for two more Championships.

“Brenda and I appreciate our fans and love racing with the great teams and drivers in IMSA racing. We are always and will be forever indebted to Action Express for inviting Mustang Sampling into their family and sharing their knowledge of Motor Sports Racing.

Keep tuned we hope to make an announcement in the upcoming months.